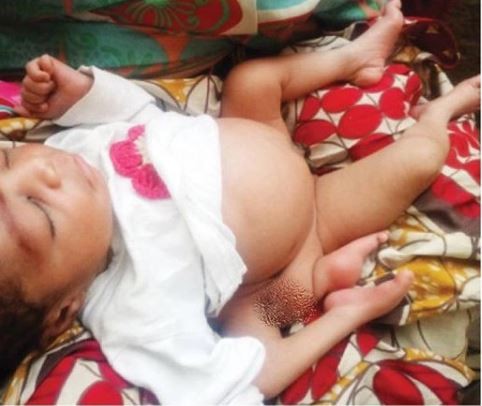 the second wife of a man identified as Malam Hassan Ibrahim, has given birth to a baby with 4 legs and 2 genitals at Sabon Garin Makiyawa in Magama Jibia, Katsina State.

According to Dailytrust, 20-year-old Zainab delivered the baby on March 9, 2018. Hassan and Zainab have been married for four years and are already blessed with a three year old son, Fahad.

Describing the baby, Hassan said, “The child has both sexes and four legs, the two abnormal legs and a penis are on the left side of the ribs, only one of the two additional legs is moving, the second doesn’t. I can say it’s a girl because the longer and normal legs have a female genital at their proper place.”

When asked if his wife attended ante-natal clinic during pregnancy, Hassan said she did. “For now, I’m made to understand from some health officials that she may need surgery to correct the defects and was given a referral later to the Aminu Kano Teaching Hospital to meet a consultant paediatric surgeon,” he said.

Doctors’ findings and examination at the Turai Yaradu Clinic stated that “the second twin was attached to the first at the sacral region to the left, swelling at the lumbo sacral region of both twins, polydactyl of the fingers. The provisional diagnosis was said to be sarcophagus con joined twins.”

'I can stay months without sex' – Nollywood actress, Sylvia Anyanwu

Wizkid Reveals-“I Have Several Girlfriends And They All Know Each Other, I Can Never Love Only One Woman”