These dramatic pictures have revealed the moment Kobe Bryant’s helicopter exploded in a fireball after it crashed into a hillside in Calabasas, California, killing the NBA legend, his 13-year-old daughter Gigi and seven others.

The photos, taken in the aftermath of the crash by a witness show the flaming wreckage of the helicopter after it plunged 1,000 feet into a hillside on Sunday.

The witness said he saw ‘helicopter parts flying everywhere’ after the aircraft emerged from ‘out of the fog’ and exploded in a ‘huge fireball’.

Before the crash, Pilot Ara Zobayan had told air traffic controllers that he was climbing to avoid a cloud layer.

On Monday, an accident investigator said the pilot asked and received special clearance to fly in heavy fog just minutes before the crash and was flying at 1,400 feet when he went south and then west.

Authorities also revealed that there was no black box on board but instead an iPad which was used for flight itinerary.

Pilot Zobayan asked for air traffic controllers to provide ‘flight following’ radar assistance but was told the craft was too low for that assistance, Jennifer Homendy of the National Transportation Safety Board said.

About four minutes later, ‘the pilot advised they were climbing to avoid a cloud layer,’ she said. ‘When ATC asked what the pilot planned to do, there was no reply. Radar data indicates the helicopter climbed to 2,300 feet and then began a left descending turn.’ The wreckage was found at 1,085 feet.

Homendy said last radar contact was around 9.45am. Two minutes later, someone on the ground called 911 to report the crash.

The helicopter, which left Santa Ana in Orange County, south of Los Angeles, shortly after 9 a.m., was heading to the Mamba Academy near Thousand Oaks, California when the chopper went down in Calabasas, about 30 miles northwest of downtown Los Angeles.

All nine people on board the aircraft, including the NBA legend and his 13-year-old daughter Gianna died.

NTSB investigators went to the crash site in Calabasas on Monday to collect evidence. ‘The debris field is pretty extensive,’ Homendy said. ‘A piece of the tail is down the hill,’ she said. ‘The fuselage is on the other side of that hill. And then the main rotor is about 100 yards beyond that.’

Some experts suggested that the pilot might have gotten disoriented because of fog but Homendy said investigating teams would look at everything from the pilot’s history to the engines. ‘We look at man, machine and the environment,’ she said. ‘And weather is just a small portion of that.’ 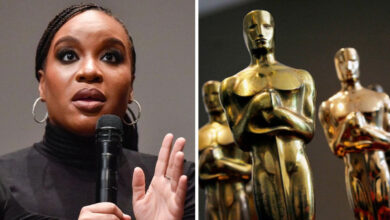 Nigerian-American film director, Chinonye Chukwu slams Oscars for ‘unabashed misogyny towards Black women’ as her movie ‘Till’ gets snubbed for this year’s nominations

“Catch flights, not feelings” – 2022 tweet of Botswana woman facing death penalty after being arrested at Bangladesh airport with 3kg of heroin