Anambra shoe merchant, Christopher Ngobidi, was crushed to death by a commuter train around the Nigerian Army Shopping Arena, Oshodi area of Lagos State on Monday, September 14, while attempting to save his son who was sleeping in the car.

One Chukwuma Ihezue, who confirmed the sad news on Facebook, said that late

Chris’ young son is fighting for his life in a hospital, adding that he greeted the deceased few minutes before the incident.

“What a BLACK Monday @ Arena today.Mr christopher Ngobidi, a brother and a friend lost his life. HE WAS KILLED BY A FAST MOVING TRAIN. HIS DEATH IS A SHOCK AND A SURPRISE TO ME COS IT WAS FEW MINUTES AFTER I GREETED HIM. Goodbye OMPA as u are fondly called,” he wrote.

“Ompa is gooone 2d world beyond! GOOD-BYE MR CHRISTOPHER NGOBIDI.death has taken you away from us. There is nothing in this life at all. I only pray that your son will never join u this soon” he added.

It was gathered that the train had earlier collided with a white Ford Ecoline 250 bus with number plate , GGE 972 GE, at the PWD area. Read previous report Here

While pulling the Ford vehicle, the train got to the Army Shopping Arena, where Ngobidi parked his Toyota Highlander on the rail tracks while waiting for the gate of the shopping mall to open.

According to a witness, Hezekiah Adekanmi, who spoke to PUNCH, when Ngobidi, a trader at the Area, saw the train approaching, he ran to his car to rescue his son, who was sleeping in the vehicle, but was crushed to death by the train.

“The man parked on the rail track while he was waiting for the Arena gate to be opened . While the train was coming with a bus that it had earlier hit , it started honking . But the man , who was not in the car , remembered that his son was inside the vehicle and he ran to rescue him,” said Adekanmi.

“Before he could come out of the vehicle , they were hit by the train and pushed inside a gutter. The man died immediately , while his son was injured . The train still dragged the bus to the Oshodi under bridge before it stopped.”

One of the shop owners around Ngobidi’ s shop, Efechukwu Udeh, described the deceased as a nice man.

“Christopher  was my neighbour in this market and he was nice to everybody.  The man attempted to rescue his son who was sleeping inside the vehicle when the train crushed him , while his son was injured. The boy is unconscious at the hospital . Christopher ’s wife called me this morning to ask after the husband , but I had to lie to her that he had not got to the market yet because I don ’t know what to tell her. ” he lamented.

Meanwhile, the Head of Public Affairs of LASEMA, Nosa Okunbor, who confirmed the latest report, said late Ngodidi’s son was taken to One Life private hospital, opposite the Arena, Bolade, Oshodi.

“Upon arrival at the scene, it was discovered that a white bus, with number plate GGE 972 GE , veered onto the rail tracks while crossing the railway line at the PWD inward Oshodi and subsequently collided with a scheduled commuter train,” said Okunbor.

“The bus was dragged along by the train for a stretch of the journey before managing to come to a complete halt at the Oshodi under bridge.  It was also gathered that while the train was pulling the bus, it crashed into a stationary Toyota Highlander Sport Utility Vehicle , with the number plate FST 763 FL . The driver of the SUV lost his life during the incident , while his son , who was with him in the SUV was taken to One Life private hospital , opposite the Arena, Bolade, Oshodi.”

Spokesperson of the State Police Command, Muyiwa Adejobi, in a statement on Monday, said the matter had been referred to the Railway Police Command for investigation.

“Around 07.45am , there was an accident involving a moving train and two vehicles crossing the rail tracks at Arena Plaza , Oshodi . Three people sustained varying degrees of injury and were taken to an undisclosed hospital for treatment,” the statement reads. 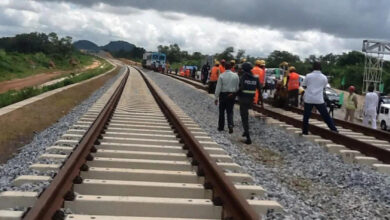 Nigerians react as FG approves $1.96 billion for construction of rail from Kano to Niger Republic 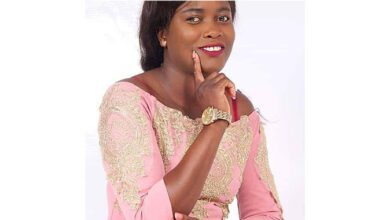 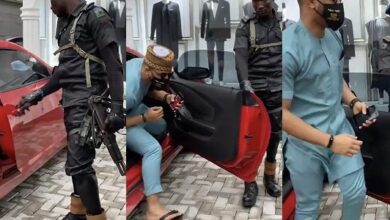