A family was thrown into confusion after their only son went missing, unaware that he was allegedly in SARS custody.

A Lagos-based lawyer has now narrated how and why the young man was detained and no member of his family was informed.

One of my student got to work this morning and told me her brother (who is in his early 30’s) that got missing for over 24 hours. That he left for work around 6:00am as usual and didn’t come back home. His mother had been crying since she got the news and he happens to be the only boy. His numbers were not going through, they went to his office and they said he never came to office. There was no way to reach him, his friends said they hadn’t seen him since weekend. So everyone had started thinking wild because nobody knew what had happened to him. So I advised her to file a missing person report at the police station, so she left.

After she left, we held a prayer session with the others on her behalf for her brother’s safety. Later called her in the evening to know how far, then she said the police found him in SARS office where he was detained. The SARS people said they punished him by switching off his phones so that nobody could reach him because he was being stubborn. Unbelievable! His whole family was thrown into confusion because of his sudden disappearance. This is kidnapping to me, how can an agency saddled with the responsibility of protecting its citizens become a terrorizing agency. One with lack of empathy for humans nor her rights. How did we get here, this is sad. 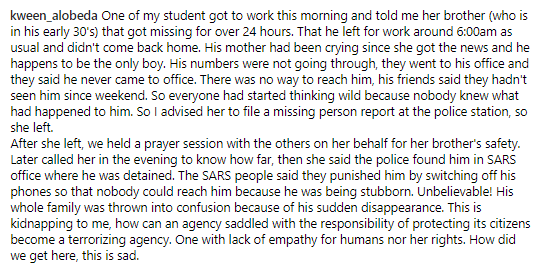 Comedian Michael Blackson’s fiancé, Rada, reveals why she allows him have 1 side chic a month, but Michael says he will never allow her have another man (video)