President Buhari’s spokesperson, Femi Adesina has fired back at the Socio-Economic Rights and Accountability Project (SERAP) over its 7 days ultimatum to public office holders on public declaration of their assets.

According to Femi Adesina, there is no legal justification to ask the President and his Vice, as well as state governors and their deputies to publicly declare their assets.

“I can say for a fact that he (Buhari) has declared his assets because I am privy to it. And SERAP asking the president to declare publicly and I ask: On the basis of which law?

“Declaring publicly is not in our laws. It can only be a voluntary thing. So, if anybody is compelling somebody to declare publicly, I don’t know, on the basis of what law?

“If the FOI Act is invoked, it would be left with the Code of Conduct Bureau to release because the FOI Act will not be for the president.

“The president has declared and it is already deposited with the CCB. So, it is the CCB to respond to the FOI Act if it is invoked.”

Kogi state Commissioner, Abdulmumuni Danga, accused of physically assaulting a young lady over a post she made about his family (photos/video) 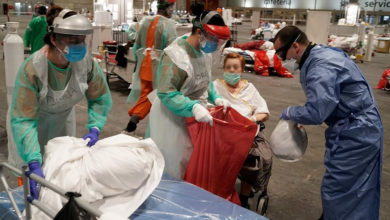 Spain records its highest number of deaths and new Coronavirus infections as 849 people die and cases rise 9,222 in one day