The woman, (name withheld) was apprehended by observed members in the church premises who drew the attention of the church security who rescued the baby and took the mother to Ebrumede Police Station for questioning.

At the station the woman confessed that she wants to kill her child due to frustration as her husband has abandoned her and the baby. So she came to the church to kill the baby to get the attention of the man of God.

By the time of this publication the child was taken to hospital for medical attention and was confirmed to be in good health. Mother and child are safe and sound.

It was also gathered that another woman dumped her baby in the church but was later found. Security has been beefed off in the church premises to avoid mothers abandoning their babies or trying to kill their child.

‘I was drunk, angry when I raped 54-year-old woman to death – arrested Herdsman says 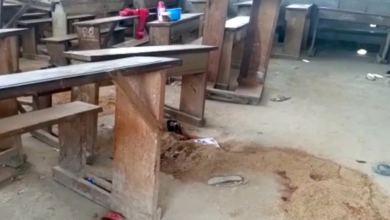 Moment a thug was arrested as he tried to disrupt the #EndSARS protest in Prague, Czech Republic (video)