Nelson De’Enabry the Nigerian husband of Lisa L. Flowers is dead, according to his family.

Days ago, Lisa Flowers, a Caucasian woman, took to Facebook to plead with Nigerians to help her find out the truth about the situation with her husband who she said has been incommunicado for a while. She said she has received conflicting news from his family but there is no proof that he is dead. 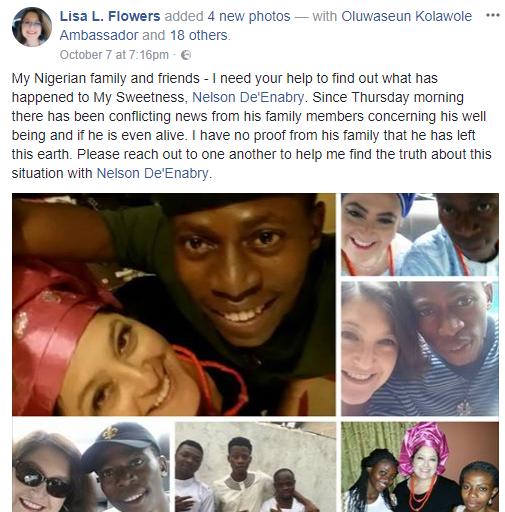 The family of the young man have now addressed the issue after a lot of Nigerians online suggested that the man and his family duped her and left after getting what they wanted.  Mr Peter Enareaba, the father of Nelson said his son is dead. He asked Nigerians to stop disparaging his son Nelson.

According to the Enareaba family, they got a call from their son’s friends that Nelson just woke up from the sleep and was gasping for air. They rushed him to three hospitals but all refused to attend to him. He was said to have died at the third hospital (Lagos State General Hospital, Ikeja).

They said there is no proof of death as the hospital did not issue a death certificate because he was a not a patient of the hospital, David Taylor who went to the Enareaba family to make inquiries said on Instagram. The family also claimed he has been buried somewhere close to ojokoro, Ogun State.

The Enareaba family denied claims that the marriage between their son and Ms Flowers was a sham contracted for what they could gain from her. They shared a photo of the only things they claimed to have received from Lisa. 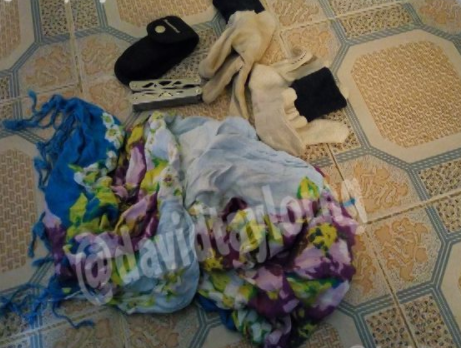 On the night of Wednesday, October 11, 2017, Nelson’s sister, Evelyn Enareaba claimed that members of the state CID have picked up some of Nelson’s friends for questioning. Nelson’s wife, Lisa is not convinced by the family’s claims and hopes the truth of what happened to her husband will be exposed very soon.

There is no perfect family, We do not have perfect parents, we are not perfect, we do not marry a perfect person or have perfect children-Pope Francis