Facebook Twitter Google+ LinkedIn Pinterest WhatsApp Telegram Viber Share via Email Print
A man whose girlfriend’s dad died 2015, decided to propose to her at her father’s grave side with a tear jerking letter asking for permission from the dead man to marry his daughter.

Justin and Meg met at university and their relationship developed organically. “We spent more and more time together. From the start, Justin always told me that he knew I was the one,” Meg told HowHeAsked.

But when her dad was diagnosed with a rare form of cancer in 2014, times were hard for the couple. “It was so rare that doctors have not found a cure yet. After my dad was diagnosed, Justin was always there for me whether it was a shoulder to cry on or someone to vent to. “At the time, I wasn’t the easiest person to get along with. I was confused, angry and in denial.

“After my dad passed away a year later, things were tough. My dad was my best friend and to him, I was truly his “little girl.” “Justin knew how much my dad meant to me and how difficult it is to experience the big moments in life without him.”

The romantic decided that he would involve Gino, Meg’s dad, in arguably the biggest moment of her life. Knowing that Gino’s favourite animal was a flamingo, Justin bought a lovely solar-powered decoration for his grave so the couple could take it together one weekend.

They chose the date, September 7, and Meg says she felt her dad was with her after a ‘sign’ when arriving at the cemetery. Justin told Meg to open the letter and, as she read, she realised it was written from her boyfriend to her dad asking for his blessing to marry her.

The last line said: “I hope you are smiling down on us during this moment… the moment I ask your daughter to be my wife.” Meg slowly turned and realised Justin was down on one knee. The bride-to-be says it was the happiest moment of her life. 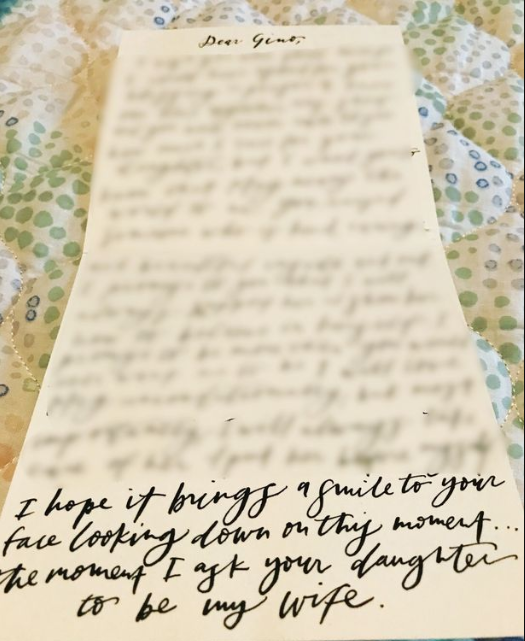