A stepfather, who was there for his stepdaughters when their abusive father wouldn’t step up to his responsibilities, got a heartwarming surprise on Father’s Day when his stepdaughters informed him they’ll like to take his surname.

Twitter user Jia, from Renton, Washington, revealed that she and her sister have been living with their stepdad for the last 12 years after their biological dad was abusive. On Father’s Day, they decided to tell their stepfather that they would like to be legally his family by taking his surname.

They filmed his reaction and shared on Twitter. In the video, the stepfather burst into tears and embraced his daughters when they revealed the news in a card to him.

She captioned the video: “My biological dad was a drug addict and physically abusive to my mother. 12 years ago, my stepdad brought the light into our world again. He’s always loved me and my sister as his own. And so we decided to change our last name this Father’s Day. I love you Dad.”

The video went viral and other Twitter users with similar stories also shared their experiences.

Update: Indian stuntman who was lowered into the river while tied up is feared dead as first images of the stunt emerge (Photos) 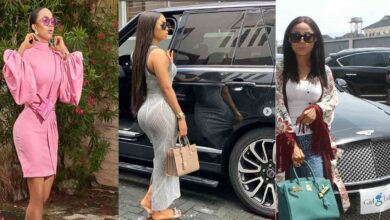