XXXtentacion‘s alleged murderer Dedrick Devonshay Williams was reportedly assaulted and raped at the Broward County jail, where he’s being held without bond.

The 22-year-old local tattoo artist also known as Tattoman Chuckie, was last week charged with first-degree murder without premeditation, a probation violation and for not having a valid driver’s license and was ordered to be held without bond.

According to a report published on Hip-Hop Overload, Dedrick Williams who is said to be one three persons that killed the 20-year-old rapper last week Monday was assaulted and raped.

It was also claimed in the report that Dedrick was attacked by rapper Kodak Black‘s friends in prison.

Read the full report and see the text the website claimed was sent by a correction officer at the Dade County Jail below.

Per someone we know that works in the Dade county jail system, XXXTentacion’s murderer Dedrick Williams was assaulted in Broward County jail. Word we got from our informant is that he was told Dedrick was getting a shower when he was ambushed with an attempted rape, which in jail is the ultimate sign of disrespect. We are told that Kodak

Black people may have had something to do with it. This makes total sense because XXXTentacion and Kodak Black are extremely tight friends like brothers. One has to think if the assault was calculated to happen the day of XXXTentacion’s memorial which was held at the BB&T Center in Broward County today.

We are currently trying to get pictures of the assault once we do we will be sure to share them all. As you see we are told Dedrick was beaten down pretty bad. 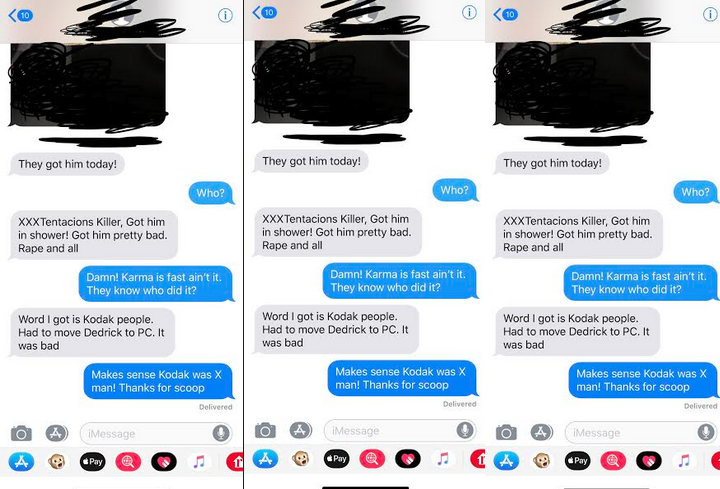 Video-Nigerians revolt after they were asked to pay bribe of N1K to collect their PVC in Lekki, Lagos

£6.1m each-This is how much FIFA will pay Nigeria after crashing out from the 2018 World Cup tournament